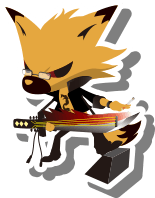 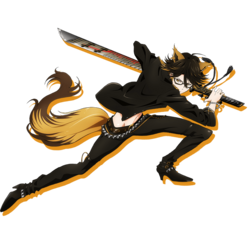 Yaiba (ヤイバ) is a member of ShinganCrimsonZ and is the band's bassist.

His bass, Ryukenden, appears to be a katana of sorts. Despite its unusual shape, he appears to have no problem holding and playing the bass. He describes it as if it is its own sentient being, claiming it is "after the spirit to rule over all savage living things on Earth".

Yaiba is a golden fox with black tip ears, tail, muzzle, inner-ear, and eyes with a red sclera. His nose is gold, and his hair sticks up in a spiked manner. He wears small square glasses, along with a black jacket, pants, and shoes accented with white and gold. He also has a dragon tattoo on his torso and wears a black wristband. In energy form he looks the same but is surrounded by a yellow aura.

As Samurai Yaiba, he gains a thicker, gradient tail and sharper, detailed eyes. His cigarette changes into a pipe, while he gains a blue cloth wrapped around his waist with gold chains, a detailed jacket, and red accenting on his shoes.

In Nine Tails form he gains more fur and red writing over his right eye. His tail splits into nine of them, while the cloth on his waist forms into a robe over his torso with red and white strands hanging from it. His pipe turns solid gold. On his back are several sheaths.

He didn't wear glasses when he was a child as seen in Legend of Black Santa YAVAI event episode.

He respects the soul of rock and Bushido. He pretends to be an outlaw with a lone-wolf personality, but really he is shy person who gets lonely easily. He comes from a family of four.[1] The bass technique "Ryukitsune Blank Mind God Style" he learned is top-knot, according to him. He's left handed.

When he was a child, he lived with his grandmother in Legend of Black Santa YAVAI event episode. Yaiba is somewhat of a childish, believes in Santa although Rom had said the Christmas presents which were given to Yaiba were his parents. He likes to play video games, also works part-time job.

Retrieved from "https://show-by-rock.fandom.com/wiki/Yaiba?oldid=13793"
Community content is available under CC-BY-SA unless otherwise noted.