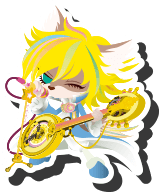 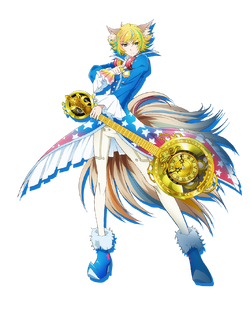 Shu☆Zo (シュウ☆ゾー) is a member of Trichronika and the band's vocalist and guitarist, using his beloved guitar, “gold mechanical clock”.

Being the No.1 talent of the big idol label 'Judas', with his sweet voice and the appearance like that of a galactic prince, he captures the fans’ hearts and doesn’t let go. Despite all of this, he dislikes it when he is asked about his past.

Shu☆Zo is flamboyant in appearance, with short yellow hair curled upwards on the sides. Shu☆Zo is a pale brown creature with pale tan muzzle, paws, tail, and inner-ear. He has a brown nose and cyan eyes with feminine lashes. He has short, slightly curled yellow hair streaked with green, sky-blue, orange, and pink to match his tail. Shu☆Zo wears a blue and white jacket over white pants and blue point-toe boots. Around his neck is a pair of pink, white, and yellow headphones.

In Stella form, the bottom of Shu☆Zo's jacket flares outward and grows in length, turning a darker color. In Planet form, the jacket turns dark navy with gold lining to match his new shoes. His eyes gains detailing to it.

In Galatica form, Shu☆Zo gains rainbow streaks in his hair and tail, along with a gold crown and large butterfly-like wings. His jacket turns white with blue, pink, and gold gradient.

In the anime, Shu☆Zo's jacket appears to be much larger than his normal form is depicted to have. His jacket is shown to flare out further with a red gradient and a white star print.

Retrieved from "https://show-by-rock.fandom.com/wiki/Shu%E2%98%86Zo?oldid=13776"
Community content is available under CC-BY-SA unless otherwise noted.