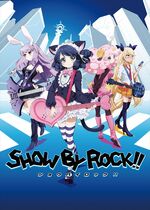 Show By Rock!! (ショウ・バイ・ロック!!) is a Japanese rhythm video game developed and published by Geechs, officially based on the characters created and produced in 2013 by Sanrio. It is Sanrio's first ever character project aimed for older males and adults, as opposed to the main female and child demographic. The original game shut down on December 26, 2019, [1] but a new game, Show By Rock!! Fes A Live, has been announced.

The franchise's first anime adaptation aired from April to June 2015. It was animated by studio BONES and aired on Tokyo MX. Funimation licensed the the first season for a sub simulcast and streamed a Broadcast Dub. A teaser video and official website were unveiled alongside more information about the series's premise at a live event on Niconico and at the 2014 Sanrio Expo on September 8, 2014, with both Furyu and Sanrio having established a production committee for the upcoming anime.

Four PVs were revealed, confirming that the anime had an original storyline from the games. In November 2015, the official Show By Rock!! Twitter and a special Girls' Rock Festival event announced the sequel Show By Rock!!#, as well as a new animated short. 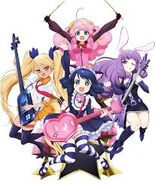 Add a photo to this gallery

Retrieved from "https://show-by-rock.fandom.com/wiki/Show_By_Rock!!?oldid=14573"
Community content is available under CC-BY-SA unless otherwise noted.