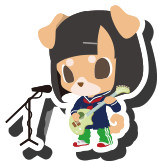 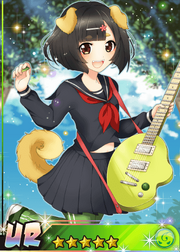 Shibarin (しばりん), is the leader of Uwasanopetals and is the band's lead vocalist and guitarist.

She was originally a member of the track team, but after seeing an urban band on TV she was inspired to form her own group by randomly asking people around campus who didn't seem busy.

Shibarin is a tan shiba dog with large brown eyes and dull black hair with a single, thin silver clip. She has a tan muzzle and dog eyebrows, and wears a navy and white sailor fuku over green track pants and red and white school slippers.

In her second form, her fuku is white with navy collar, cuff, and skirt. Her slippers gain blue sole instead of red, and her pants are now dark red.

In her third form, Shibarin's hair grows out and turns brown. She wears a grey and white top with a navy skirt, brown loafers, and dull blue knee-socks. In her last form, she switches to a red and white shirt.

Transformed, she wears a black and red sailor fuku and a pair of dark green and white sneakers.

Shibarin is a girl who regularly laughs, cries, and eats. In addition, with all the nonsense her bandmates' get into, it appears she is slowly becoming the group's straight man.[1]

Retrieved from "https://show-by-rock.fandom.com/wiki/Shibarin?oldid=13779"
Community content is available under CC-BY-SA unless otherwise noted.