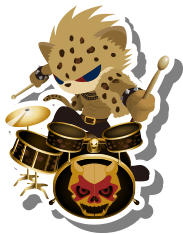 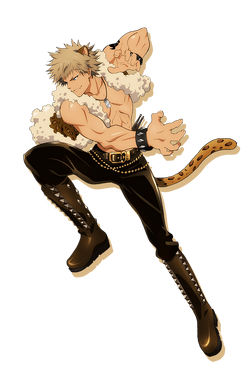 Rom (ロム) is a member of the band ShinganCrimsonZ and the band's drummer.

Rom is a leopard with dark red schlera and dark blue pupils. His body type is hoso macho and he wears a furry leopard-print vest, black spiked wristbands, a necklace, and brown pants with a belt. His hair is spiked and sticks up.

In energy form his vest turns grey, while in soldier form he wears a green vest with several pockets and matching green pants. His eyes also gain a glow to them.

As Wild Soldier, he wears a black and red eyepatch over his loose, black jacket worn like a cape and matching pants and army hat, all with a camo-print.

In human form his attire has more detailing, while his tail is gold with spots instead of stripes. His vest has fluffy trim.

With a hot-blooded personality and a fist that moves faster than his mouth, Rom is revered by his band mates as a leader, he can inspire them to tears with most of his speech's regarding the band's goal to "carve a legend into music history".

Rom is a wild-type in nature with a cocky and proud personality. He loves his physique and often shows it off whenever he wants attention or just has no idea what else to do if he is unable to express himself through violence. Despite this, he is very persuasive and can win people over with very little effort.

Rom and Shu☆Zo were once in a band together called Amatelast, and both had the same dream. However, after realizing their different approach on how to achieve it they decided to disband. Afterwards, now with Rom being in ShinganCrimsonz and Shu☆Zo being in Trichronika, they and their band members have developed a very strong rivalry with each other.

Unlike his band mates who all wield "Holy Weapons" for instruments, Rom has tremendous physical strength and appears to be able to coat his fists in fire during battles against Dark Monsters, or when stopping his band mates from fighting each other. This could just be an artistic depiction, but there is no real evidence for or against the argument. Yaiba refers to Rom's attacks as "Legend of Violence".

Retrieved from "https://show-by-rock.fandom.com/wiki/Rom?oldid=14281"
Community content is available under CC-BY-SA unless otherwise noted.