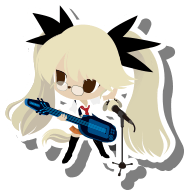 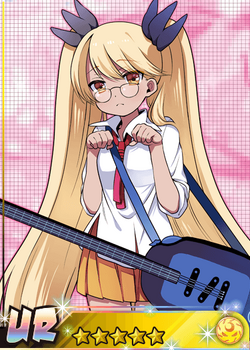 Thought to be cold and cool at first, there is more to her than what meets the eye. Her bass is called "Blue Station."

Retoree is a golden retriever who wears glasses. She wears her blonde hair in two long pigtails. Her attire consists of a white elbow-sleeve button up with a red tie, a matching orange pleat miniskirt. She also wears over the knee boots.

In light form, outfit turns orange save for the button-up which remains white, and she gains a background of bubbles. While in Yellow Form her outfits becomes more elaborate and more detail is added to the coloring. Her background also, gaining hearts.

As Gold Miracle her hair gains more dimension through coloring. Her outfit becomes much more elaborate through coloring and detail, as layers are added and her hair accessories become feathery. Her background also gains more hearts, bubbles, and stars.

Smart phone addict and net geek dog girl. Although she seems cool, she is actually very shy. When a specialty of hers comes up, she becomes very excited. Barks a lot on the internet. She doesn't like shop clerks or people who are comfortable with their offline lives.

Retoree is a tech-savvy type with some interests that may be considered nerdy or geeky to some. She loves to collect figurines, cosplay, and keeps up with bands and news on the internet. She is very smart with an aloof nature, but she is actually really shy and sensitive. Deep down she wishes to grow closer to her bandmates.

As a human in the anime, she looks exactly the same except her bows gain a blue tint and her eyes are a light amber.

Retrieved from "https://show-by-rock.fandom.com/wiki/Retoree?oldid=15095"
Community content is available under CC-BY-SA unless otherwise noted.