Show By Rock!! Wiki
Register
Don't have an account?
Sign In
Advertisement
in: Characters, Anime, Criticrista,
and 5 more 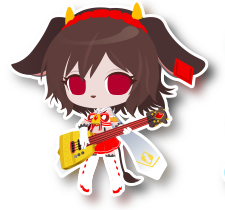 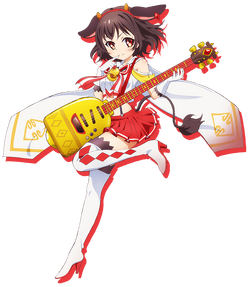 Holmy (ホルミー), is a member of the band Criticrista and the band's vocalist and bassist.

She is also the student council's president.

Holmy is a white cow with crimson eyes and short, dull brown hair. Her cow ears and tail are slightly darker, with a red diamond earring in one of them. She also wears a red headband and has two gold horns, as well as a brown nose. Her attire consists of a short white and red top with a red and white striped bow at the collar, adorned with a single cow bell that has a tiny red diamond on it. Around each arm is a piece of gold cloth, while the skirt red and white pleat skirt is held with two thin black straps. Her white boots and gloves are lined with grey ruffles, while each boot has red buttons and a sole. A long, two-sided cape hangs around the neck with a gold, diamond themed design on it.

MofuMofu Holmy gains detailing to the eyes and her hair returns to its normal color. She is shown wearing a pink, fluffy cow outfit with white trim, pale pink sleeves, and red tights. Her bow and collar ornament remains the same, while her cape appears to be made out of fluff.

In Wedding Form, Holmy's eyes are shown to be sparkly while her hair turns dark again. A sheer white bride veil covers the top of her head, attached to a silver tiara adorned with several rubies. She wears a white dress and pale pink-white gradient boots with ribbons on them to match the pale pink ribbons on her wrists, held with a single ruby. The diamond gem on her bow is now white and the cow bell is gone.

In the anime, she looks the same.

Holmy is a serious person with little problems who’s always being swayed by her band members, who go at their own pace. She’s the kind of person who understands other people’s troubles though.

At the time of her enrollment her ordinary results couldn’t attract much attention but her passion for music couldn’t be rivaled by anyone. She came back alive from a special training of hell in the school’s undergrounds and entered the special entertainment subject.

She is enrolled in St Midi Girl's Academy, where she met Rosia, Jacklyn, and Tsukino, and they have been close friends ever since.