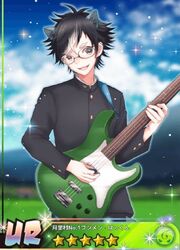 A boy with a quiet personality, he joined the band in order to become popular with girls. He was originally a guitarist, until Shibarin stole his guitar, so he picked up the bass instead.

A light grey civet with dark grey eyes worn behind glasses and matching freckles. He has short dark grey hair and white dot-style eyebrows to match the stripe going down the center of his face. His nose is pink. He wears a dark grey male school uniform with white and blue school shoes.

In his second form he switches his attire for dark grey pants and a white school shirt. His shoes are now white and yellow.

In his third form, his hair is now blue and a bit messier. He loses the freckles and his glasses are now rectangle in shape. He wears a white shirt beneath a dark blue best, dark grey pants, and brown loafers.

In his last form, his eyes and hair gain more detailing. His vest is now a purple top with a design on it, while his pants and shoes also gain detailing.

As a human he appears the same, but the white marking on his face is now a streak in his hair.[1]

He is Shibarin's childhood friend, whom he was interested in since he was a child.

Retrieved from "https://show-by-rock.fandom.com/wiki/Hakkun?oldid=13376"
Community content is available under CC-BY-SA unless otherwise noted.