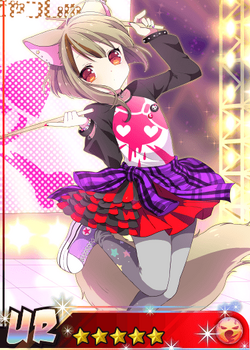 Fennery (フェネリィ), is a member of the band Studdo Ban Gyasshu and is the drummer. Always noisy, she may be a crybaby but her drumming technique is quite something. “That’s reality” is her favorite phrase.

A cream fennec fox with large brown eyes and dull tan hair worn in a bob with the one side longer than the other. On her bangs are two pale brown streaks. The inner-ear is soft pink while the nose is brown. She has two earrings in her ear to match her other bandmates. Fennery wears a white and dark grey top with a black design, a red plaid skirt, pale grey tights, and black shoes.

In Studdo form Fennery's hair turns melon with dark green streaks. While in Studdo Mania, her blonde hair grows in length with dark pink streaks and pink eyeshadow. She keeps a single earring and gains a necklace and dark grey stockings.

In Studdo rock, Fennery gains several earrings in her right ear and keeps the one in her left. Her hair is now fuchsia with streaks of raspberry and soft chocolate-brown underneath. Her attire is the same.

Transformed in card form, her top has a hot pink design on it and her skirt has a split design down the middle. She gains different bracelets and shoes, along with a purple plaid skirt around her waist. Her tights also gain a star design near the bottom.

As the youngest member, Fennery is spoiled by nature. She is unable to keep calm, full to the brim with energy.

Retrieved from "https://show-by-rock.fandom.com/wiki/Fennery?oldid=13761"
Community content is available under CC-BY-SA unless otherwise noted.