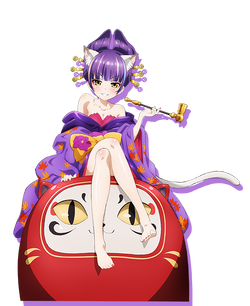 Daru Dayu (ダル太夫) is a member of the group Tsurezure Naru Ayatsuri Mugenan as well as being the band's drummer. She also sings in the anime.

A mysterious drummer hidden in a Daruma who’s still continuing her journey. Rumors say that this Daruma is only her temporary appearance. Her true self seems to be hidden inside the Daruma[1]

She met A and Un on her journey during their performances. Believing it was fate, she thus formed the band.

She is considered by A and Un to be their master.

A red daruma figure with cat ears. Four yellow lines are on the torso to match the cat eyes of the white face. The nose and mouth are red. In Fire Flower mode, the Daruma gains whiskers and a pair of white and orange wings.

In Sacred Fire mode, the Daruma gains a light gradient on its top half while its wings turn white and are tipped in crimson. It gains dot-style eyebrows while behind it rests a red and gold paper fan and a matching colored rope.

In God Fire mode, the body is white with a pink tint and opened, detailed eyes with markings surrounding them, gold ornamental whiskers, and dot eyebrows. It gains another set of arms while the wings and ornaments behind it turn pure gold. Gold coins, a gong, lanterns, and clouds surround it.

In the anime, the Daruma resembles its third form but lacks the ornaments behind it. Daru Dayu is a white cat girl with long, purple hair pulled up into two spiral buns held with several gold ornaments. She has gold slanted eyes and red makeup surrounding them, while her bangs are streaked in pastel of blue, green, yellow, and pink. She wears a long purple robe with gold and orange leaf on it, along with a white or raspberry cloth covering her chest, and a gold ribbon around her torso. Sometimes is barefoot and she can often be found holding a Chinese pipe.

Retrieved from "https://show-by-rock.fandom.com/wiki/Daru_Dayu?oldid=15097"
Community content is available under CC-BY-SA unless otherwise noted.