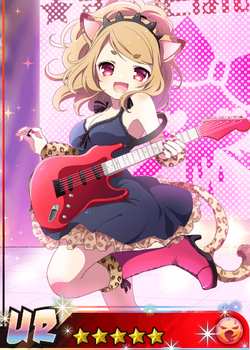 Citti (チッティ), is a member of the band Studdo Ban Gyasshu and is both the lead vocalist and guitarist.

A tan cheetah with tiny brown dot-eyebrows to match her nose and lines on her ears. She has spots on her arms and tail, while her inner-ear is soft pink. She has crimson eyes with three lashes. Her long, sandy-blonde hair is worn up with several waves and a black spiked headband. Her attire consists of a short black dress and raspberry boots with purple sole.

In Studdo form, Citti gains a yellow hair bow while her hair is split into two colors, one side dull brown and the other pink with magenta streaks. Her attire remains the same. In Studdo Mania, her eyes gain detail while her hair gains more streaks within it. Her dress has a frilly lace skirt now, and she wears white leggings or tights. At her neck is a black string with a gold diamond hanging from it.

In Studdo Rock form, Citti switches to a raspberry dress worn beneath a black jacket and necklace. Her hair grows slightly in length with more wavy locks and a shiny row of stars adorning her pink bangs. Her eyes are now turquoise.

Transformed, Citti is generally the same. However, her ears are tipped in brown instead of lined, and a cheetah pattern is applied to various parts of her attire. Her dress is dark blue in color and she gains cheetah print lower-arm sleeves. Her nails are painted hot pink to match her pink eyes.  She gains hot pink nail polish to match her now pink eyes, along with cheetah print lower-arm sleeves.

The cheetah girl who wants to become “a cool girl”. Her extremely passionate personality might cause things like overdoing it after a live show’s first half. She often ends up crying from being deeply moved while singing.[1]

Retrieved from "https://show-by-rock.fandom.com/wiki/Citti?oldid=14060"
Community content is available under CC-BY-SA unless otherwise noted.