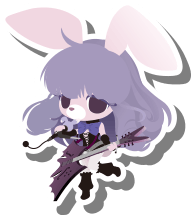 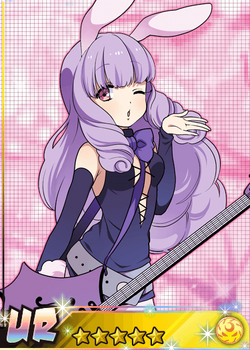 Even though she secretly dreams of becoming a solo artist, she likes and is liked by her bandmates, acting as the secondary guitarist and main vocalist of Plasmagica.

She is shown to be very charismatic and an honor student. Every day she diligently works at playing her guitar 'Antique Batman'.

In Light form her attire turns purple and instead of a dress she is wearing a corset and what appears to be a mini skirt. In this form she gains a backdrop that is mainly bubbles and a few sparkles. While in Purple Form her outfit has a lighter purple and white motif, and her background gains hearts as well as becomes more elaborate.

A sociable and cute but very chairman-type of rabbit girl. The leader of the band, she is trusted by all of the members. In fact, she is so ambitious, she has been secretly aiming for a solo debut, She never misses a day of practice with her guitar and is very serious when it comes to music.

She has a strong will and is very kind. It's easy to make friends with her.

Ever since she was a young girl, ChuChu wanted to be a solo artist after seeing Grateful King performing and how the crowd worshiped him. She started by playing on the street for anyone to enjoy, and when she was picked up by Maple Arisagawa to join Plasmagica, she accepted because she thought it would be a stepping stone forward to her solo career.

During her time with Plasmagica, she began to grow jealous of Cyan for her popularity, causing her Melodisian Stone to cloud and turn dark. After being contacted by Dagger, manager of the biggest music industry in Midi City, she's convinced to abandon Plasmagica and pursue her solo career with Unicorn Music Inc. Her bandmates do manage to clear her heart of her dark feelings by reminding her of the joy she felt with them and the songs they wrote together.

In the anime she is mostly the same as in-game, with some slight color alterations, such as her hair being slightly bluer.

Retrieved from "https://show-by-rock.fandom.com/wiki/ChuChu?oldid=15089"
Community content is available under CC-BY-SA unless otherwise noted.