Show By Rock!! Wiki
Register
Don't have an account?
Sign In
Advertisement
in: Characters, Anime, ShinganCrimsonZ,
and 4 more 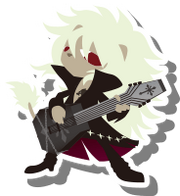 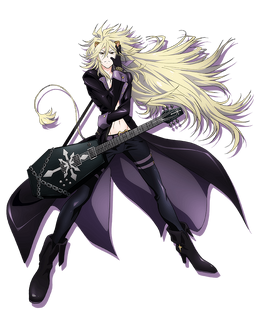 Aion (アイオーン) is a member of ShinganCrimsonZ and is the band's lead guitarist.

He calls himself "The Dark Sun God", or "Black Monster," and always upholds himself in a regal manner, posing with a hand slightly covering his mouth most of the time. He is the older brother of Ailane.

His guitar's name is "Holy Ark."

Aion is a pale grey lion with red eyes and a brown nose. His mane-like hair is white to match the tuft of fur on his tail. He wears a black trench-coat with black pants and boots.

In Demon form, his eyes gain more detail and the sclera turns black. With his outfit he gains a red gradient cape with wispy, ripped up edge and small bats formed around him. He gains red accenting on his attire.

As Scarlet Eye of Darkness, the cape gains a purple hue along the tips and his hair is hidden by it. More bats are summoned around him, one of which wears a mask.

In the anime, his mane and tail gain a platinum blonde tint, while his attire is black and purple instead of red.

A self-proclaimed Black Monster dressed in black clothing, Aion is a handsome lion who acts suspiciously and can't seem to speak if he doesn't have his hand in front of his face. He's always mumbling nonsense to himself. Many female fans fall victim to his genius guitar technique during lives. He gives off an aloof, intimidating aura.