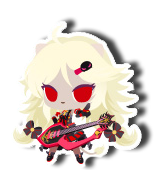 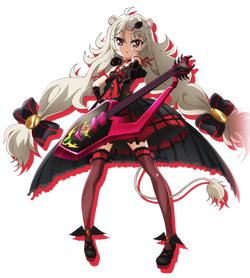 Ailane (アイレーン) is the guitarist and vocalist of the band Bud Virgin Logic.

She is a lion and Aion's younger sister.

She is a tan lion-type Myumon, with long platinum blonde hair tied into pigtails. She has red eyes and wears a red and black dress and outfit, with two bows keeping her pigtails tied. She also wears a hairpin with Dagger Morse's face adorning it. She is short and small in stature.

The majestic lion girl who looks down on everyone. A charismatic beauty with a strong soul of language (kotodama) who carries the aura of a king. Music and principles of being a good emperor have been taught to her since her childhood. However, this turned her into a rather unathletic person who finds everything bothersome. She's a clumsy person who falls and drops things often. She likes high places and prefers things smaller than her.

Ailane grew up with Aion in their family mansion, but were separated when Aion ran away from home. From then on, she was to be raised as the heir to the family, taking Aion's spot.

She has had nightmares about Aion before, and searches him out in MIDICITY, confronting him and eventually making up.

Retrieved from "https://show-by-rock.fandom.com/wiki/Ailane?oldid=14330"
Community content is available under CC-BY-SA unless otherwise noted.